Thoughts on future of Hong Kong

We had this meeting within The Economist Club in Hong Kong themed 'Future of Hong Kong', about 9 people had attended and we talk around Hong Kong - China (Mainland) relations.

At first I thought to write an analytical overview why most of the people I have met are being generally pessimistic on Hong Kong prospectives in next 20 years, dislike mainlanders and include thoughts were shared by attendees of The Economist Club meeting. But then decided not to do that, but rather share thoughts about future of Hong Kong that I think is happening.

More Innovation
There will be more science and engineering due to the role of Hong Kong Science Park. Most of my active time in the past three years I spent in Science Park, where could observe a rapid expansion from about 300 companies to more than 600 companies and more than 250 startups in the incubation programme. Last year, Ming Wai Lau Centre for Reparative Medicine was established to further accelerate research in stem cell biology, biomedical engineering, biotechnology, and regenerative medicine at Karolinska Institutet with its hub in HKSTP. New technology park will be built on the border with Shenzhen, four times larger than present Science Park. The Hong Kong Government will spend HK$10 billion in 2017-18 to support the development of innovation and technology, support IT talent cultivation and boost fintech development.

Deeper Integration with Mainland - Pearl River Delta
Although many people cry out about increasing influence of China Mainland, with a few exceptions, I think it is on better. Many businesses have benefited from influx of mainland tourists as well as working and selling services in Guangdong province or expanding further to China. It creates jobs and helps more people to make living. In a city where one out of seven people is below poverty line - it matters. 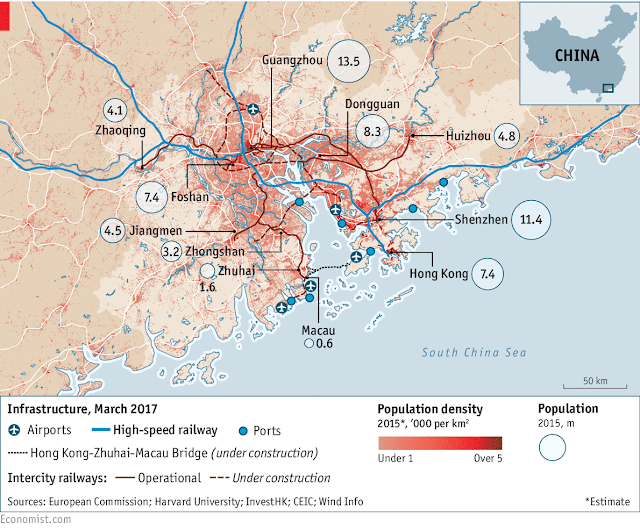 The Pearl River Delta (PRD) is home to nine mainland cities in the province of Guangdong, notably Shenzhen and Guangzhou, as well as Hong Kong and Macau (see map). The World Bank recently declared the PRD the world’s biggest megacity, surpassing Tokyo. With over 66m residents, it is more populous than Italy or, just, Britain.

Though the delta accounts for less than 1% of China’s territory and 5% of its population, it generates more than a tenth of its GDP and a quarter of its exports.

This modest-sized triangle of land and water near China’s southern fringe has one of the world’s most successful economies. Its GDP, at more than $1.2trn, is bigger than that of Indonesia, which has four times as many people. It has been growing at an average of 12% a year for the past decade. As a global trading power the region is outranked only by America and Germany. [The Economist Special Report "Jewel in the Crown"]
In the past 20 years Hong Kong didn't change much, but China changed a lot. Many Hong Kong people just can't realise yet how profound the change is and how much it affects Hong Kong's original competitive edge (the rule of law, democratic system and finance). As Mainland integrates more into world's economy, many companies just bypass Hong Kong go directly to the mainland to do business; the story of Hong Kong as a gate to China is not appealing as it used to be.

In order to sustain itself and prosper, Hong Kong people shall seek a closer integration within Pearl River Delta on all levels. To start with, think of the territory as a part of megacity PRD, like Manhattan of New York City, but on the much larger scale.