Just as the Muslim tradition requires that all members of the faith, at least once in their life, make the same pilgrimage that Muhammad made from Mecca to Medina, so Christians in the first millennium considered three routes to be sacred. The first led to the tomb of Saint Peter in Rome. The second led to the Holy Sepulcher of Christ in Jerusalem. There was a third road, which led to the mortal remains of the apostle, San Tiago – Saint James in English, Jacques in French, Giacomo in Italian, Jacob in Latin. He was buried at a place on the Iberian peninsula where, one night, a shepherd had seen a brilliant star above a field. The legend says that not only San Tiago but also the Virgin Mary went there shortly after the death of Christ, carrying the word of the Evangelist and exhorting the people to convert. The site came to be known as Compostela – the star field – and there a city had arisen that drew travelers from every part of the Christian world. These travelers were called pilgrims, and their symbol was the scallop shell.
[The Pilgrimage, by Paulo Coelho] 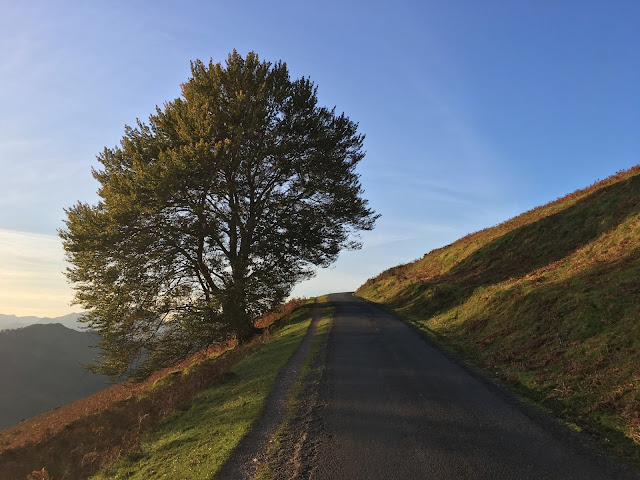 My body wants to go, but my mind wants to stay’, - said Carol to me, a woman of age of about 65 from the USA, while we were walking along the Way. I thought how amazing she is as well as other pilgrims I had chance to meet and talk with. Everyone would have his or her own reason for walking Camino, about 800 km road from the South of France, St Jean Pied de Port, to the West of Spain, primarily Santiago de Compostela. I did mine a bit further - to places like Fisterre and Muxia, known as ‘the end of the world’. In pre-Christian times people would walk that path by following stars and would eventually arrive to the coast of the Atlantic Ocean and perceive that as the end of known world. It was 900 km journey by walk in 31 days.

I knew about the Camino from the book of Paulo Coelho, The Pilgrimage. Paulo is well-known Brazilian writer, who wrote his first book (which was The Pilgrimage) after completion of Camino de Santiago. He is mostly known for his second book, The Alchemist, which is one of the most widely read novels of our times. So I read The Pilgrimage about 10 years ago and always had this idea to do Camino. Yet due to few reasons, I was postponing this idea from year to year. And one evening, on Sept 21st, Thu, after I was back from work, I was meditating at home before sleep. And I had very this strong sense that I have to go to the Camino, as soon as possible. This idea was with me for years, but it never felt with so much intensity and clarity. ‘Camino calls you’, they say. I would perceive that call for many months and share it with my friends, whose advice was ‘This is not good time to do so. You need to focus on the business’, which is very logical and has a perfect sense. But then I thought there would not be better time than now and I believe it is important to listen to inner voice, especially when it is so obvious, so I decided to go. I booked flight, borrowed a backpack from my friend Raymond, bought some additional advised stuff for the pilgrimage (like sleeping sheet, special hiking socks etc) and on Sept 25th, Mon, I landed in Paris and spent one and half day in the city. From Paris I took a train to SJPP, which is the starting point of the French Way. Camino can be walked in many ways. People can start from doorstep of their homes, like did one man, whom I met. He divorced with his wife, quit his job, and walked Camino right from his front door home in Belgium. There is one Camino can be walked from Moscow or from London. It doesn’t matter where to start, as long as keep going towards the destination, a goal. 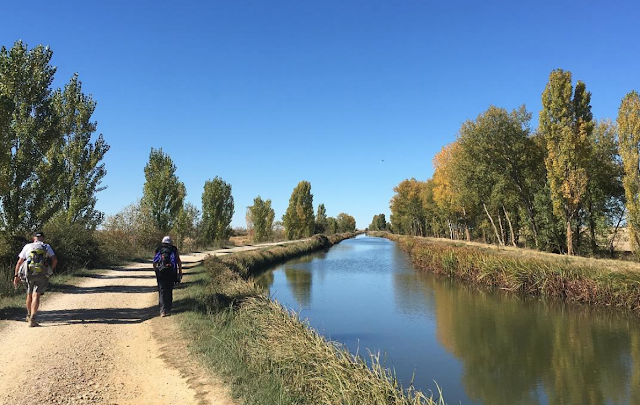 The whole process of pilgrimage is simple and straightforward: it is walking. Praying is optional, yet most of the people I met were not religious. Every day for the next 31 days I walked about 30 km (sometimes 40, sometimes 20-25, one day I even walked whooping 56 km). I would start early in the morning, like 6:30-7:00 AM (sunrise was after 8 AM). I would walk in the dark, sometimes use headlight, but most of the time just following and watching the stars, the Milky Way. And while looking upon stars, I would often think of what Immanuel Kant once said: ‘Two things fill the mind with ever new and increasing admiration and awe, the more often and steadily we reflect upon them: the starry heavens above me and the moral law within me.’ By late afternoon or sometimes evening I would arrive to planned village, or unplanned one - just if I would like the village - I would stay there overnight at albergues, specifically designated homes for pilgrims. There are many on the Way and sometimes in the room could be up to 50 people and we would sleep on bunk beds. Sometimes I would sleep at the monasteries albergues, those were my favorite type - so much history and authenticity, and I liked monk or nun humble way of life. 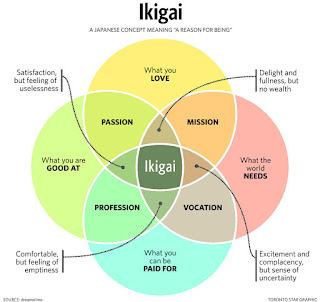 The reason why I decided to do Camino de Santiago is primarily to find my ikigai - reason to wake up or reason for being. It is a Japanese concept and some believe is the secret to a long, happy, meaningful life. In addition to that on the evening I arrived to SJPP I wrote a list of more than 80 questions, which I had to myself, like what are my actual values, what do I want to achieve in life, what kind of people I want to be with etc. And gradually I would be coming up with answers along the Way. Sometimes it can be after hours of reflection, or while talking with another pilgrim, or reading a book (I read five and half books while walking Camino: ‘The Pilgrimage’ and ‘The Alchemist’ by Paulo Coelho, ‘Master and Margarita’ by Mikhail Bulgakov, 'Radical Forgiveness' by Colin Tippling, '1984' by George Orwell and half of ‘Don Quixote’ by Miguel de Cervantes Saavedra).


I would describe Camino experience in several dimensions, such as people, nature, culture and to-oneself.

People was the most incredible part of the Camino experience. Every person has his or her reason to do Camino. Someone likes hiking/walking and being in the nature, someone is searching for meaning in life, someone is dying of cancer, someone is hurt because of broken relationship or lost loved one. Many said that Camino has healing effect, emotionally healing. And their stories and life experiences is something incredible. Other pilgrims and their stories is what made it memorable.
For example, Tessa worked as social worker for mentally disabled children in the UK. After Camino she will start to work in the area of child adoption - bringing and repairing connection between a child and newly adopted family. She is practicing meditation (she even meditated in the medieval catholic church), never close her house (she lives in the far and remote area in England), loves cats and cows.
Ignacio is Argentinian who lived past five years in Paris. He likes literature and radio. After Camino is going back to Buenos Aires and wants to work for radio station. While walking, he would listen to lectures about how to write a novel. He walks fast and impressively far (like one day Ignacio did 65 km).
Lisbeth came from New Zealand, and while walking the Northern Way she broke her arm, had operation, but after it decided to keep walking. She comes every two years to walk different path and strongly denies that she is addicted to Camino. At home she is on advisory board in the area of pharma vaccination, loves TB bacteria and gardening. Once retired, she will open a hostel along 3,000 km famous hiking road in New Zealand. She is also learning Spanish, because her third son fell in love with Chilean girl and moved to Chile. She plans to visit him next year and also meet with parents of his girlfriend, who do not speak English. We talked a lot about how life in like in New Zealand, about invasion of Chinese, housing prices, family, climate change, family retirement etc. That was very lovely walk.
Carol is retired advanced nurse from the USA who divorced her husband (a painter) after living with him for 27 years. She still loves him and says it hurts when knew he found another woman to be with. Yet she believes it was a right decision.
Mike is another American from Washington state, who adopted two boys from Ukraine. When I asked him why did he chose to adopt boys from Ukraine, he said that Ukraine is the country which allows single parent adoption. Both boy’s biological parents died and he is coming back with them once a year to visit their relatives.
I also met an Irish guy, who is a fisherman. Many of his family members and friends walked Camino and he decided to try. He spends less in a day on Camino than when he is at home in Ireland. He owns a boat and has flexible schedule, so he is doing pilgrimage in sections.

Camino gives you an opportunity to immerse and reconnect with nature. Seeing beautiful landscapes, listening to the song of the bird - it’s about being there and experiencing the beauty.

Culturally-wise Spain is diverse, each province has its own culture, traditions, language and food, of which they are very proud of. I ate mostly Spanish food, tapas, nachos, coellas, cod, Iberian secret, tortillias - these are some of the many local dishes. In one village when I arrived, they celebrated some local festival and let people to enjoy hot chocolate. I did not know that hot chocolate in Europe is originated from Spain and happened to be in the first city, which introduced it.
Every day I walked mostly by myself. A lot of thoughts went through my mind. It was reflective journey, a ‘strategic pause’, as one of my friend’s put it.

Once I decided to walk in night and got lost in Spanish fields between villages. I wanted to return to the road by walking across the field, which does not have a road, because it seemed to be a perfect shortcut. Yet I got even more lost and ended up in bushes walking uphill. I was thinking about fears, my fears and why do I have them. Researchers proved that we are born with only two fears: fear of fall and fear of loud noises. Other fears are learned. So they can be unlearned as well. As Franklin D. Roosevelt famously said “The only thing we have to fear is...fear itself”.

Also I realized that I want my life to be based on Love. It might be obvious, but since early childhood I learned that love can hurt. Thus I consciously chose not to get close with others. I learned not to miss people and places and developed very strong survival skills. Yet Loving is one of four needs of a human being according to Steven Covey. I do not want to ignore it, even if it means that I have to become vulnerable again.

While walking I have seen many crosses and people put stones next to it, sometimes with pictures of the loved ones they have lost. At one of such crosses I also saw this: 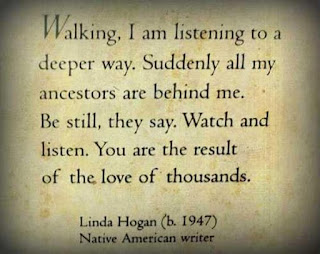 I am the result of love and that's why I think love shall be in the core.

I found that all the answers I needed within myself. Often they are not complete, because those questions do not have one certain answer forever. 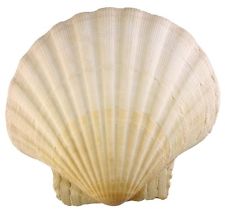