Translantau: not making it through

There are mistakes and there are failures. If you can fix the mistake, it's not a failure. But here is a failure and what I learned from it. 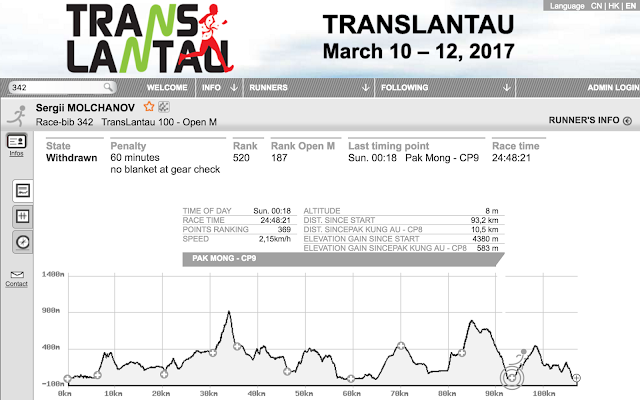 I withdrew from Translantau Ultra 100 km after going 93.2 km, at last check point. It is a trail running event on Lantau Island, the biggest outlying island of Hong Kong (https://translantau.com/). We started run at 23:30 on Fri and it took me nearly 24 hours to get to the last check point. Obviously there was no-sleep night on Fri as we were running, plus many participants including myself had full working on the day of the event. So it was a good challenge from the start.

How did it start 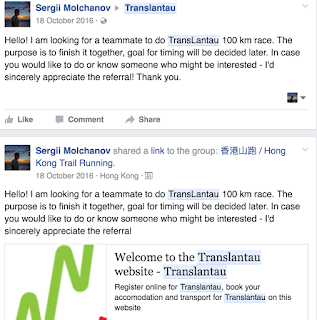 A former colleague, Nelson, told me about this trail-running event. He said there is an option of 25 km, 50 km and 100 km. 'Of course, I will go 100K'. So the registration day came (sometime in October 2016) and I was set on the list. Also there was another Ukrainian running as well, but I haven't chance to get to know him in person.

In fact, I wanted this race as a team activity (you can go solo or in a team of two). So I was like a desperate texting all the friends and related Facebook groups in a search for a partner. Some people were asking what's the target time. I replied: 'to finish together as a team'. As registration time came, and I couldn't find a partner, so I register by myself with the hope that some other solo registrant would want to team up. It didn't happened, although I tried to get form a team with another Ukrainian as well as posing in the group of the event that I am looking for team mate. So I go solo.

Between mid-October, 2016 and March 10th, 2017 there was enough time to prepare. Starting from late November every weekend I was out for running or hiking and doing exercises for legs twice a week in Science Park gym. My running routine would be about 16 km on average, from Wan Chai to Aberdeen and come back. On the meetup I have joined a Hong Kong trailrunning group and managed to go with them once. Also in the meantime I signed up for another race on Jan 1st, which supposed to be a 50K thing as a mid point to Translantau. Unfortunately due to the family reasons, I was in Ukraine at the time of the event and missed it. So translantau was going to be first ultra trailrun with 100K.
As time came closer to the date, I got a little anxious. Some of my friends: 'Do you really need that?' or 'Dude, perhaps you wanna do reality check. One of my friends did like you and then was on physiotherapy for years'. Almost every Sun during Skype calls Grandpa was sharing how it is like to have osteoarthritis and that nature set the body to certain limits.. So I had some doubts whether to go as maximum I ever run before in the mountains was 25 km. But the experience and the challenge, pushing personal boundaries were quite appealing, so we took off on Fri, Mar 10th, 2017 at 23:30 at starting point at Mui Wo. 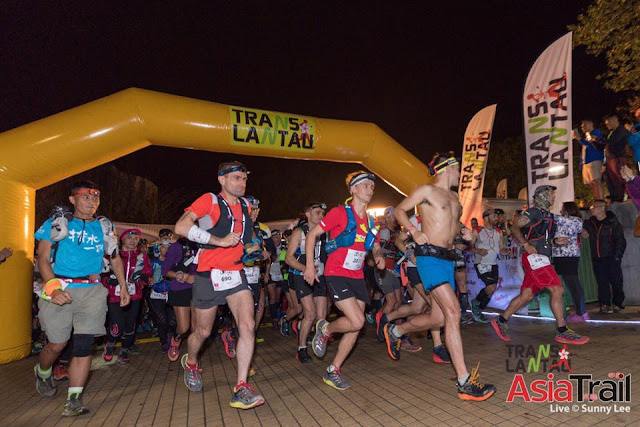 First 20 km were relatively easy. I was the one to outrun others (as it got a little crowded with few hundred people on the trail designed for one or two people) and never let someone to outrun me (had clearly to keep it up to the second check point). After that when someone was overrunning me it felt somehow uncomfortable, but after third checkpoint I stopped to pay attention it and focusing on myself.

The weather was really nice. Something we were missing was only the snow. It was on the way to Lantau Peak when I was considering to put some stones into pockets in order to ensure I will not be blown away by wind. But it was a beautiful challenge. I liked that part the most.

Trailrun like translantau ultra 100 km is as much a mental challenge as a physical one. Here I discovered that meditation was a preparation as physical running from Wan Chai to Aberdeen. I wasn't aware, but yeah - as part of preparation for long distance run, meditation should be on the list. The effect of it is well explained in Headspace video:

While on 40 something km, I got this clear determination to complete the race. Mentally I was good and very committed when on 80 something km. I got okay to run with knee pain from about 16th km, and it got especially painful going down from Lantau peak. It felt like at every step down while flexing someone poked a needle of the inner side of the knee. Pain is more a mental perception, and it can be managed.

When you are on the race like that - you do not run 100 km. You run distance from check point to another check point with short breaks (around 10-15 min). Eating elephant piece by piece. Something what I found useful is anchoring: follow someone whose pace is slightly faster than yours. It was especially useful on some hard and technical part of the trail for such a newbie like myself. On some parts I was a pace-maker, when someone was following my pace. It is a kind of anonymous team work as you do not know the person you run for (or run-chasing, like a child's game), and still quite fun. It also helps mind fully concentrate on the next step and not wonder around.

It was not about the pain and ability to run, but to walk. Something I didn't realise was that I had to get the determination from the body to complete the race. I know it may sound a little strange, but trailrun is a game of two: a body and a mind. Although they are connected, but not entirely the same. When arriving at last checkpoint, I could literally hear my knee. In addition to that eyesight got blurred and was losing focus. That's especially important when going downhill with unevenly distributed stones on the way. Doctor did not recommend to continue and I personally realised the limits of the body.

It is especially not easy to accept on the last check-point. But in some sense that is what I was going for - to push the limits. I found it and after recovery begin to get ready for next year Translantau or another ultra trailrun event. Hopefully will do it in the team.