Appeal to international leaders and the world community

You probably have already heard about on-going war between Ukraine and Russia. There is something I would like to say, as Ukrainian 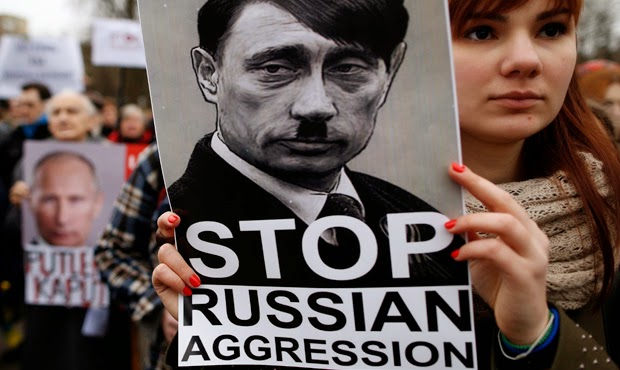 
On July 17th Malaysian airplane was shut down with 298 people killed by Russia-sponsored separatists using Russia-sent military technology on the east side of Ukraine. On August 27th between 3000 to 4000 Putin's troops have invaded Ukraine (evidence with satellite pictures you can see here). By official UN data more then 3000 Ukrainians have been killed in the war with Russia-backed separatists and Russian troops, many of them just like my age - around 23 or even younger. Also intensive information war with dozens of lies is led by Russian government through controlled media. For example, the boy allegedly wounded in Donetsk turned out to be in Syria (a picture taken a year ago) or a movie still used to illustrate real news from Donbas (more evidence you can see here). No doubt why 84% of Russians are supporting its government actions towards Ukraine. Thus I want to ask you think critically when you read/ watch news about Ukraine. Sometimes even such global news giants as TIME and CNN can misinterpreted facts and information. From my side I will share with you important news from time to time what's going on.


A bit of history

Historically Ukraine has been under Russian occupation more than 300 years (since 1654 till 1917  as a part of Russian Empire (俄罗斯帝国) then since 1917 till 1991 as part Soviet Union 苏联). During those times millions of Ukrainians were died because of their political views. For example, Holodomor - the Stalin-directed man-made famine on most of the part of Ukraine in 1932-1933 has taken from 2.4 to 7.5 millions of lives of Ukrainians. But we survived, kept our spirit for freedom high and got independence 23 years ago. Through the history we didn't see much good stuff from Russia We never give up. As an old Chinese saying goes 有志者事竟成 (where there's a will, there's a way).

It is true that militarily Russia is stronger than Ukraine (so far #2 or #3 by world's rankings with nuclear weapon). Ukraine is not that well prepared to have a war with Russia and need international support. We are also clear that no other country wants openly to fight for Ukraine against Russia. That's our business. However, there are several things what governments of other countries could do to support Ukraine. Leading Ukrainian intellectuals and members of the civil initiative group First of December* have called for the international community to re-examine its policy on Russia in the midst of the ongoing war in Ukraine. They have announced the statements with hope that the international community will come around to taking the Russian threat against Ukraine and international order seriously:

Russia launched a war against Ukraine.

This aggression is large-scale, long-term and far-reaching.

The Kremlin has violated all fundamental principles of international relations, values and norms of coexistence of independent states in Europe.

Demolition of the world system has started with a potential to bring disastrous consequences for the whole civilization.

Aggression was brooded for quite some time and many of us saw its nascence, but did not want to believe in such a brutal and incredible reality.

Russia does not want to accept Ukraine’s freedom and independence. Neither does it accept the sovereignty of any other neighbouring nation. Fatal thirst to restore the empire seized the country.
Information war against Ukraine has an unprecedented scale and becomes an industry of deceit worldwide. In their propaganda the regime is positioning Russia as a victim of the worldwide conspiracy led by the United States.

Influenced by massive intoxicating propaganda Russian society became prone to old illnesses of chauvinism, xenophobia and fear of the outside world.

Step by step with amazing accuracy, the story of the Third Reich repeats itself.

We are obliged and able to stop the aggressor.

This is not a local war, which the world can ignore from behind the border.

The key to the safety of every single European country is not a blissful ignorance of the threats or individual agreements with the aggressor, but solidarity and defending the values and principles that are the basis of European civilization.
There is no long term stability, if values are not protected.

Putin’s regime forces the world to make sacrifices. Modern German, French or Spanish citizen have to sacrifice their well-being and peace not for the sake of Ukraine. At stake are the fundamental principles of European culture, and it is better to pay a lower price today than much higher one tomorrow.

Main motivation for the Putin regime to continue aggression are not the fabricated “crimes” of the Ukrainian government but a permanent retreat of the West in the face of ever bolder criminal actions of the political regime of Russia.

The aggressor must realize that he crossed the permissible limits and the world is not viewing passively the brutal force.

We are grateful to the world for solidarity and support. Totally demolished Ukraine left with no support would be a victory for Putin. Defended and successfully reformed democratic Ukraine would be a triumph of European culture.

It is not up to us to determine what aid specifically can be provided to Ukraine today. It is the mandate of the Government to decide. However, we ask our foreign partners to note that every statement about their “inability to use military force” is accompanied by another outbreak of the military aggression from Russia.
Every “peaceful” dialogue with the aggressor turns out to become another tragedy for Ukraine on the battlefield.

The war can be called “hybrid”, but the human losses can not.

We call on the international leadership and the world community to review their policy on the Russian-Ukrainian conflict and realize that the main source of war and aggression is a political regime of President Putin.

Comprehensive and strict isolation of this criminal regime is the most urgent task that should be done to save humanity from a repetition of the tragedy of the Second World War.

Putin has destroyed the soul of his country. He caused his people to become dread for the world. He launched a deadly attack on us all.

Putin thus distorted the second decade of the XXI century, but setting the parameters of the future is not up to him.

We believe that a consolidated Euro-Atlantic community can do it: to revive and protect the defining values of own culture.

You can support Ukraine by resending this letter to your friend.