where is America - is there a war?

Today I attened one event in Cocoon (startup comunity in Hong Kong and co-working space) and met with two Hongkongnese gentelmens in their best 40ies. One of them did a presentation about education in HBS. Main message: "Good companies push their managers to do more operational excellence. But Great companies push managers to spend more time on strategy development. A great company starts from a great strategy". Well can be argued. The great idea in nothing without great execution. And one can't be well without another. But it's not what I want to write about. 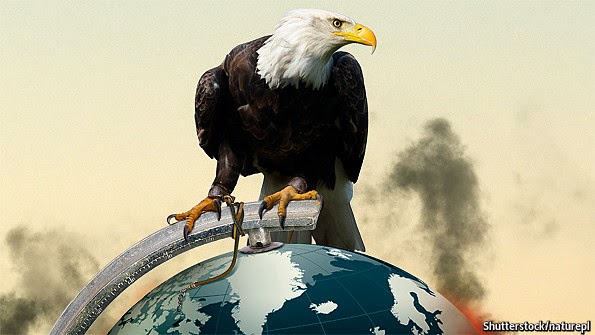 There was another person with him - his friend. When both of them recognized I am from Ukraine, they asked one of the most frequently asked questions: "Are you pro-Russian or pro-European?" I replied that Ukraine needs to be more integrated with EU. And then this gentelman (a friend of the presentor) said something like this:

I will tell you something and you might not like it. Everything what's happening in Ukraine is because of NATO and America. Ukraine has been with Russia 300 years. When Soviet Union collapsed, all these west side countries of USSR went to EU and NATO - Baltic States, Poland, Romania, Bulguria.. And Russians didn't like it. Especially NATO. Thus they will fight against if NATO will get closer to their borders.
In next 20 years there will be wars in Asia, becasue America is coming back to Asia. Where is America - there is a war. America left Asia in 1976, when Vietnamese war was ended. After that we had no wars. But America moved in 1990s and 2000s to Middle East and Africa - wars in Afganistan, Iran, Iraq, Sudan had happened. Then Arab Spring had happened. And now America is coming back to Asia. So we expect wars here.

I am not quite familiar with the US foregn policy priorities, but it seems like the US have good presence practically everywhere on the planet (except Russia since recently, also North Korea). The US gave really big support to South Korea and Japan over last 40 years (thus the statement about "The US left Asia in 1976 and moved to Middle East and Africa" can't be really true). Also in XXI century the US is reviewing its role as a "global policeman". In recent NIC report "The Global Trends: World in 2030" (published by National Intelligence Council (NIC) is the center for midterm and long-term strategic thinking within the United States Intelligence Community (IC) are several statements on global trends, one of them:

There will not be any hegemonic power. Power will shift to networks and coalitions in a multipolar world

Last month Barak Obama has visited four countries in South East Asia. Among all the questions have been discussed, also security. For instance, Mr Obama reassured Japan that it can count on America if China seizes the disputed Senkaku islands (which China calls the Diaoyus). In the past few years Malaysia, Myanmar, Vietnam and the Philippines have all moved towards closer relationships with the US, seeking protection from China. And events can sway perceptions. However last six years the US policy was to try to avoid war as much as possible. The Economist article "What would America fight for?" has questioned the US willingness to fight. There are some warm spots in the region, but whether it can be turned into the war-conflict with the US involvement - it is still a question. Thus I can't agree with the statement about the US as an ultimate resource of war conflict for the time being. It can happen, because the country is a "security back-up" for many states globally (NATO members), but it depends on who will be an initiator of the conflict. And I don't think it will be the US.

Note: all the views and ideas expressed in this post are subjective views of the author and might be matter of change with the time being.