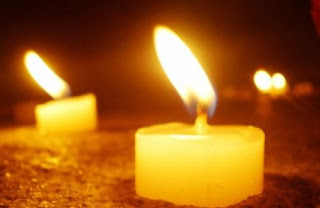 Today is annual national memorial day in Ukraine. 80 years ago was a time, when around 1.8 billion to 12 billion people (different sources provide varied data) died, because of hunger-extermanation by Stalin's regime.

The Holodomor was a man-made famine in the Ukrainian SSR between 1932 and 1933. During the famine, which is also known as the "Terror-Famine in Ukraine" and "Famine-Genocide in Ukraine", millions of Ukrainians died of starvation in a peacetime catastrophe unprecedented in the history of Ukraine. - consolidated information from Wikipedia

We have to remember that time. Traditionally for the memory of those, who were killed in the genocide, we commemorate by a minute of silence and set a lighted candle on the window sill in Ukraine. In large cities on the main streets also light candles, everyone can come to do it.