During 3rd-7th September I took part in one of the most interesting events last year – 7thEconomic Forum of Young Leaders, which was held in Nowy Sacz, Poland (100 km from Krakow). It was four-day forum, where near 300 young leaders from different European and Middle East countries met and learnt what’s going on in Europe, what’s the future and so on. Some interesting facts before, during and after the Forum, which might be interesting:

·         Hitchhiking to Nowy Sacz. Yes, we did this – catched three cars from UA-PL border to the city (300 km). In true, it was easy and we didn’t wait more than 15 min. We (me and friend Sergiy) arrived to Nowy Sacz in late evening September 2nd and were not sure could we stay in our dorm or not. On the way of dorm we mixed the place and came at home to one polish family. Old women opened the door and when I told her who we are and why we came she said “Not understand” and called for her daughter. Later we found the place and everything was fine!
The Forum.
-        People: young, bright and talented as on such level forum. During the forum I did a bit research – asked some of them about their vision for life, do they have goals and so. For me it is one of the criteria of true leader: person, who understands his/her own values, principles and established short and long term goals. In true, only few of them could answer on my question, and most of them told “I don’t know what’s going on, life is changing so fast, etc.”.


After back to Ukraine, I realized it was not best way to learn about people. I think the main criteria for a leader should be responsibility. Leader should be responsible for each action, which he/she makes in life. Probably, next year I will do another research: ask participants more about what are they doing in their countries, for what they are responsible for, how do they understand responsibility, what makes them as a leaders. It is some kind of fun for me – do researches and learn from people).

-         Content: really good. Organizers did absolutely fantastic job and we met several global leaders and in EU level scale particularly. We discussed about democracy with former President of Poland Lech Walesa, transportation system in Poland with Minister of Transport, other global issues with Deputy Prime Minister, Minister of Administration and Justice of Hungary, President for Central and Eastern Europe, Schneider Electric, Günter Verheugen - Vice-Chairman of the European Commission (2004-2010) etc. Also we got the possibility to visit another forum in Krynitsa, wich is really global and I participated in several sessions about Ukraine-Russia-EU gas issues, about China today and tomorrow, about crisis of capitalsm values and so.

Things, which I’ve learned:
1)      Problems of young people are same in Eastern and Central European countries and no matter are you from Montenegro or Georgia or Ukraine. During the workshop “Youth welfare and entrepreneurship” we worked in small group, where participants developed and identified common problems (like lack of jobs, market over-crowded by one profession) and found solutions.
2)      EU will exist. We had a lot of discussion about this. Current and future leaders so like the idea of EU, EU itself and will do everything for keeping the Union together.
3)      EU needs Turkey more, than Turkey needs EU.
4)      Ukraine will be the Member State in 20-30 years. But first of all, we have to develop our country to the level of average EU country and then decide – join the Union or not.
5)      Germany is a leader in EU, what Merkel says – it will be. Other small and medium EU countries just follow Germany. Only France, the UK and sometimes Poland can say something opposite, but key questions decide in Berlin, not in Brussels. This was said by Member of the Parliament of Slovenia or Hungary and for me this point has a lot of reasons to believe.
6)      Think like there is no box at all. Think without box. This statement was said by a member of Slovenian Parliament in Krynytsya, if I am not mistaken.

The Forum was interesting for me. A lot of young people, future leaders from different countries, good topics for discussion with interesting speakers. I believe that you have to visit this place at least once in your life, if you really want to do something big and global. Just Go! 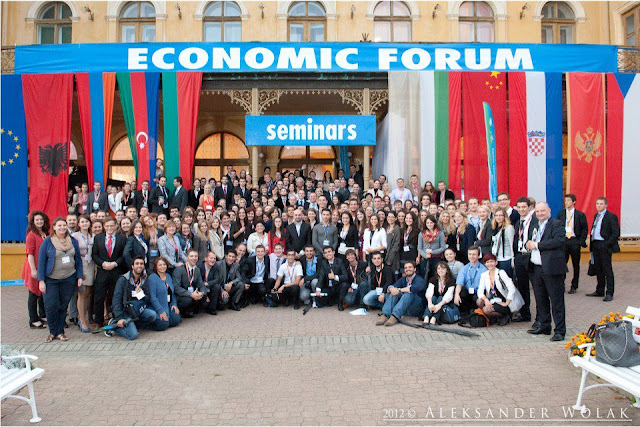