Europe in a suitcase

Last three days I participated in the program "Europe in a suitcase" and just went back from the hotel "Rus" where I have lived last time (in true, that hotel is not bad as you can imagine just from outside view near Olimpiysky stadium). In true, I did not think that is so good, when I sent an application. I just had an idea: Sergii, there will be some might be interesting or might be not so lectures about EU ingtegration and you can partly participate. 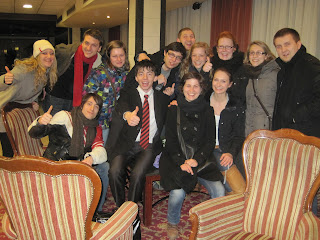 But finally that was no. I mean, there were lectures about Europe and EU integration (that is different - not same and important), but interesting. We met some first officials, like former minister of foreign affairs Borys Tarasyuk (now he is a leader of Narodny Ruh Party), also for me it was interesting to recognize the political situation in Ukraine in 2012. The speaker was Nico Lange (Director, Kondrad-Adenauer-Stiftung Ukraine) a German guy. He told very truly and not nice thing about our politicians (corruptions, elections, Yanukovych and family power and so on) and if I were not living in Ukraine and could get the impressions "Oh, God, how these poor people can survive really in such kind of bad politic and economic conditions". By the way, it was like a cold shower.

Some important points, which I got:


The main idea and goal of the project is to explain for Ukrainian what European intergration means actually. Because everyone is talking about that, but no ine has a clear idea what it is in real life. So, me and other people from Germany and Poland and Ukraine will visit in the middle of May a Bessarabia region (south part of Ukraine) and tell people what it is.
However, the most interesting for me were people. That were really smart and adequate germans and polish guys :D with whom we had a lot of fun. For me they are heros: to come to Ukraine and visit different regions so far from capital city, from their hometowns just for the idea of European integration and giving people in villages and small cities what it is. I really like all people from my team "Six Stars" (with them I will visit Bessarabia in May) - Bettine, Felix, Justyna, Karolina and Inna. Also with Monika, Malte, Adam I had very nice conversation.
Also I participated in pannel discussion for students of Dragomaniva University (group from 70 people) and was a moderator of the whole disscusion. I was so suprised that people do not have any ideas about what is Summer School, opportunities for volunteering in Europe and short-term study programs.. People need good education and a wish to explore the world as much as possible. C mooon, guys, 21 centure on the street!!
By the way, it was really really good experience and I very like that project. Thanks to Natalia Sad, Weronika, Gert and all other organizers for organizing such kind of project.