on the last weekend i was participating in Hanyang Model United Nations, as wrote before, represented Japan. In true, it is very hard to decide global issue, such as achievement Millenium Development Goals for Persons with Disabilities and to invent the definition and measures towards environmental refugee. 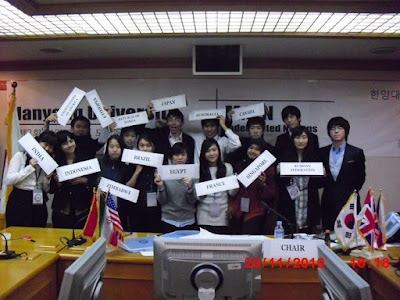 Anyway, it was very very interesting. I spent so much time for preparation and undestanding Japanese foreign policy. Actually, it was very helpful for me and allowed confidently participate, keep an active position.
Consequently, i got best delegate of Hanyang Model United Nations. The prize is 200 000 korean won (almost $200) for this one. Would like to say "Thank you" to Keren (Brazil) and Jeff (Australia) for active participation.
Probably, i will register for next year MUN in Singapore.
It was not being a lot of participants, but we created two resolution regarding our agendas in debatable discussion. We had fun as well, initiator was Tici from Honduras (he is originally from this country). His "sexy" voice everyone will memorize so long time.
Also me and Jeff got as most diplomatic delegates. I want to tell that is so big progress for us, because on the last G20 Hanyang Summit i got as the most open to create War (was being very agressive).
Thank you Young Jin Lee (also famous as Mister Super Chair :)) and his team for organizing this conference and make that very practicaly and with a lot of experience (specially in creating and writing resolutions, particularly operative clouses).

On this weekend i'm going to Busan, the second largest city in Korea. But about that - later.

thank you, that you are with me and still reading this blog.