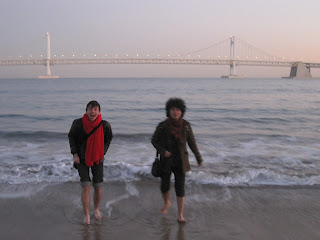 On the last weekend (4-5 December) i've being in Busan, the second largest city in Korea. So much impressions. Fauzen, Maya's friend from Indonesia, did for us a great excursion by this city, perfect guide :) 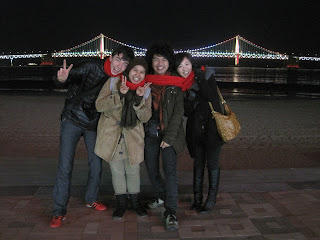 Came by train on Saturday, morning, then went to a fish market, had lunch, then city center, Busan Tower, went to the beach, try ocean water - actually it was cold, very cold. I took with me some additional clothes, because thought that weather will be cold (in Seoul last Friday was near -3C), but a surprize happened) - it was warmer in compare with Seoul. We had feeling that arrived to another country, because of a climate-temperature gap. It wes very beautiful in night on the Busan's beach, different lights of buildings, bridge, ocean and 3 have-fun-people :) 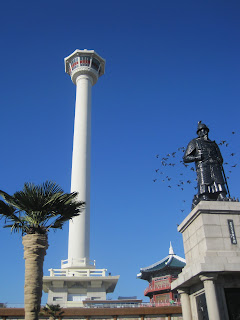 Evening time we came to a japanese restaurant for eating suchi. In Korea some restaurant allow next system: you have to pay only 10 000 won (~$10) and can eat so much as you can, unlimited. It was thids one. We ate many sushi, may be on one year in future) 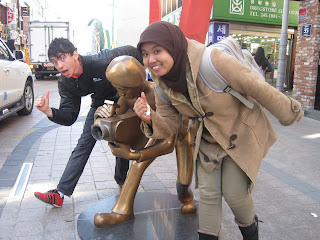 In the night we (me, Fauzen and his roommetes from Mexico and Turkey) went to the club, by the way met with one guy from Australia and he joined us. 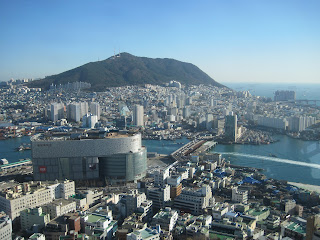 In the club i met with one japanese girls, we had fun together (just nice dancing, drinking & kissing :))
I also cognize more about culture differences in korean, particularly for "table behaviour". So funny: if you are yonger, you can not drink directly in front of older man/women and have to do it (drinking) in the other side (undirectly). So funny.
On sunday we woke up near 11 (yep, i was sleeping in Fauzen's dormitory room, illegal, in his bed), had lunch, then moved to a beach side, went to APEC-building (in this building in 2005 presidents of APEC countries had appointment). 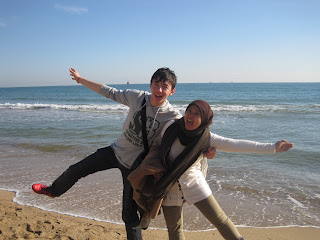 Finally, in evening we arrived to Budda's temple, very famous (because of was made from stone, usually temples are from trees). Departured to Seoul by bus. I really like Busan, thank you Maya and Fauzen for fantastic company and a lot of fun. Next weekend we (me and Maya) will meet Fauzen and his japanese girlfriend in Seoul, already prepared a special tour-program.