How I escaped the War in Ukraine

It has been over three weeks as Russia begun a full scale war with Ukraine. I was in Kyiv on Feb 24th, when it all started. A call from grandpa woke me up at 6:30 am:

- What? I have not heard anything, - I said, barely opening my eyes being half-sleeping.

- No sound of sirens? My friend called me from California. He said they are bombing Kyiv.

- No, I haven't heard anything, - I responded after looking out of the window. The city was quiet.

I hang up and continue to sleep. The evening before I booked a flight from Kyiv to Almaty, where I planned to go for business trip - a demo road show with a medical device I am promoting. Then before 9 am I received a call from my sister, who lives in Vilnius, Lithuania:

- Did you see the news?, - she asked worryingly. - The war has started.

I went online to Ukrainska Pravda news website (Ukrainian Truth), and saw the article titled: "THE WAR HAS STARTED". Not truly believing that's what really happening, as Kyiv on that morning seemed to be calm and quiet in the downtown area, I decided to pack my things and head to the main train station. Upon arrival, I saw crowds of people waiting for busses and the military officers saying that the train station is closed (only arrivals, but no departures).

Then I decided to go to the main bus station. The metro was free. I quickly moved in and arrived to another part of the city, where the bus stop is located. While walking there I saw a huge traffic jam with cars that was barely moving. There was a bus parked on the side road with people in. I came to the driver and asked: "Are you going out of Kyiv? Can you take me in?", but they refused. Then I saw a car with marker Uklon (Ukrainian Uber). I came to the driver to ask if he can drive me out of the capital. He asked me where exactly do I want to go. I checked on Google map - all the roads to the west side were in red (which mean heavy traffic) for several kilometers. However, the road to the south along the Dnipro river was more clear without much traffic. So I asked to drive by that road to a town called Rzhyshchiv.

Although it was about 70 km, it took us nearly 4 hours to get there. From that point I planned to take a road to the western side. On the way we saw huge lines to gas stations of cars. Driver agreed to drive me after Rzhyshchiv towards Bila Tserkva. However, on the way we run out of fuel and he had to stay in the long queue to get the gas. While I decided to continue the journey and hitchhike. Another taxi stopped quickly and I asked the driver to bring me to Mohyliv-Podilsky, a city on the border with Moldova. 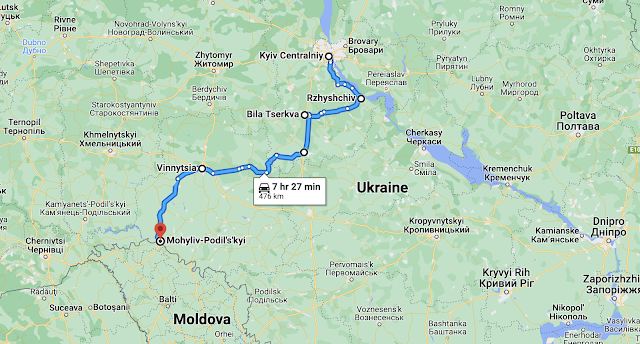 After passing Vinnytsia, we stopped at gas station for the bathroom. When I came out of the bathroom, the driver had gone, leaving my luggage standing where the car was parked. I was a bit stunned. I think his family must have called him and asked to return, as they all were worried about Russians. But I was shocked more about him leaving me like this at dusk without saying anything. He could have told me that he can't drive me far, due to the family. Fortunately, there were more cars at gas station and I managed to get another car towards Mohyliv-Podilsky. The driver turned out to be a former military who used to be in French private army (aka French Vagner). We had a conversation about the war and his experience, cryptocurrency, etc.

When only 5 km left to Mohyliv-Podilsky, we were stuck in the traffic which was not moving. I decided to go by walk. It was already a night and chilly, but moving fast kept me warm. At the entrance to the city, after the roadblocks, there was a gas station, where I got a sandwich and water - first time since early morning.

I walked to all the way to the border control when a woman came out to the crowd that was lining up and announced that all men between 18 to 60 are not allowed to leave the country. I was surprised and did not expect that will be the case. So I still tried to double check, but they refused to let me to cross to Moldova.

Not being sure what to do next, I simply started to walk back and thinking of my options. Suddenly, I hear a voice from a man: What, they did not let you pass?

Then I walked to nearby hotel. Woman at the reception told me that there is no rooms available. I asked if I can stay at the lobby, as it's really cold outside. She allowed me to stay and warm up a bit. After some time, as we had a conversation, she said that I can stay on this sofa overnight, but need to pay a room rate. I agreed, as I did not have any place to go. That's how I spent my first night after the invasion.

When I woke up in the morning, the receptionist advised me to go to the border control point and try to cross it again. When I arrived, I heard the same story - no man 18-60 can leave. I saw families - women and children separating and saying goodbye to their husbands and fathers. It was a lot of tears.

- Daughter, please say goodbye to your father, - a woman told to her nearly 5 years old baby while hugging a man next to her.

I could not look at it without tears.

- You go, dear. Go without me, be safe. I will stay here, - a young man says to his fiancee, as both of them caught by surprise of this restriction.

- Do not separate, - a mature woman tells them. Stay together.

I walk to the check point and ask again while showing that I have permanent residency card in Hong Kong. Maybe they will accept it. A woman looked at my documents and says: Let me check. There was a man earlier this morning with permanent residency from Cyprus. They allowed him to cross. She took my documents, but then returned saying that because I do not have a stamp in my foreign passport that I am a permanent resident, I can't cross.

In the meantime, I am in touch with a distributor in Kazakhstan as they expect me to arrive in two days for a demo road show and training. Natalia, a contact person from distributor, sends me a letter confirming that I am invited for a business trip and they have arranged meetings and presentations at hospitals. After receiving a letter, I needed to find a place to print it. So I went to the city centre to look for a printing shop. At the printing shop that was open (it was not easy to find as lots of businesses were closes due to the war), I told them that have this issue to cross the border. The guy who was printing for me a letter recommended to go to another check-point, which is about 10 km distance from this one on the other side of the town. They are less strict there, he says, - maybe they will let you cross.

I take local marshrutka to that check point, called Bronnytsya. Indeed, it is much less busy and smaller. I walked to the gate - a man checks my documents and says the same: no man in my age shall leave the country. I responded that I have permanent residency (PR) in Hong Kong and that I do not live in Ukraine since 2013. He looked at my Hong Kong PR ID and says: Ok, you can go. Not believing, I am approaching a window of the immigration officer.

- Oh, where are YOU going? Don't you know that a man in your age can't cross the border?

- But I have permanent residency in Hong Kong and I do not live in Ukraine for last 9 years.

With downlifted mood I was walking back, when the first man who let me pass asked:

- Why are you coming back?

- The immigration officer told me so.

- Give me your documents. I will check with the officer-in-charge

I handed over my passport and HKID, he goes to that immigration officer and now two of them go to the third man, who is the officer-in-charge. I see three of them chatting for couple of minutes. Then they walk back, and this man saying: take your documents and try again. So I tried again and the same immigration officer, who sent me back, now took my documents and processed it for the border crossing.

As I was crossing the border to Moldova over the Dnister bridge, I could not believe it is actually happening. It was surreal.

Once I made to Moldova and thought to reach Chișinău, the capital and hopefully to fly from there. I got there by taxi and bus. However, the airport was closed. They were afraid that Russians would attack and closed the airport.

So I checked where is the nearest airport - it was in neighbouring Romania, city called Iasi. In Chișinău I found a taxi driver and asked him to bring me to the border with Romania...

Next day from Iasi I took a flight to Warsaw, where I stayed with my good friend Alice and the following day I took a flight to Nur-Sultan, the capital of Kazakhstan. I meant to arrive there two days earlier on the flight from Kyiv, had Russian not invaded and bombed Ukraine.